I came across the above video on facebook and I couldn’t stop listening to it. While what Guru Dandapani was saying made eminent sense I just had this tingling feeling that he resembled someone from my childhood. I finally clocked who it was, Dhalsim from Street Fighter 2 Nintendo. I remember we used to call him Dharasalama or something like that.

Apparently Dhalsim is one of the most stereotyped character in video gaming history (he had muscular build with an emaciated body🙂 but it’s interest how art & life begin to mirror one another once again.

In the series, he is a yogi, a husband, a father, and a pacifist who goes against his beliefs by entering the World Warrior tournament to raise money for his village. 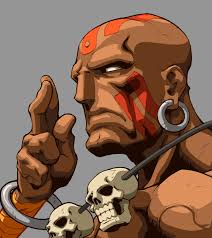 In 1992, Dhalsim ranked at number five in the list of Best Characters of 1991 by the Gamest magazine in Japan.[3] IGN ranked Dhalsim at number eight in their list of top Street Fighter characters, noting his unique gameplay and role as a “popular oddball”.[4] The Guardian ranked him as the 15th-top Street Fighter character in 2010, with writer Ryan Hart saying his abilities to extend his limbs “changed the way you see fighting game characters”.[5] He additionally placed number fourteen on GameDaily‘s list top Street Fighter characters of all time.[6] He was also included in their list of the top 25 “baldies” by GameDaily.[7] In 2013, Complex placed Dhalsim third in a list of “12 Old School Video Game Characters Who Were Style Icons”.[8]

Topless Robot named him one of the “most ridiculously stereotyped” fighting game characters, calling him the most outlandish of Street Fighter II‘s cast and drew comparisons to the Indian assassin in the film Master of the Flying Guillotine.[9] The satirical book A Practical Guide to Racism, implicitly criticizes his portrayal as a sum of negative stereotypes of South Asians, where Hindus are portrayed as “nonviolent, magical, fastidious, stretchy, and pugnacious”.[10]

The book Game Design Perspectives notes Dhalsim as an example of a “nemesis character” in video games, one difficult to master proper usage of but widely considered one of the strongest characters in the game as well.[11]