If folks over here are not already aware, a major ancient DNA paper on cattle came out last week in the Science magazine. It had an unprecedented 67 ancient cattle samples.

Genome-wide analysis of 67 ancient Near Eastern cattle, Bos taurus, remains reveals regional variation that has since been obscured by admixture in modern populations. Comparisons of genomes of early domestic cattle to their aurochs progenitors identify diverse origins with separate introgressions of wild stock. A later region-wide Bronze Age shift indicates rapid and widespread introgression of zebu, Bos indicus, from the Indus Valley. This process was likely stimulated at the onset of the current geological age, ~4.2 thousand years ago, by a widespread multicentury drought. In contrast to genome-wide admixture, mitochondrial DNA stasis supports that this introgression was male-driven, suggesting that selection of arid-adapted zebu bulls enhanced herd survival. This human-mediated migration of zebu-derived genetics has continued through millennia, altering tropical herding on each continent.

Well the widespread Zebu presence in the LBA Near East is not exactly a new discovery. It has been known for quite sometime now among archaeologists. This article gives a good overview on the subject.

Nevertheless, with this new study, we now have conclusive evidence that the widespread Zebu admixture in the Near Eastern cattle did indeed start around 2000 BCE. 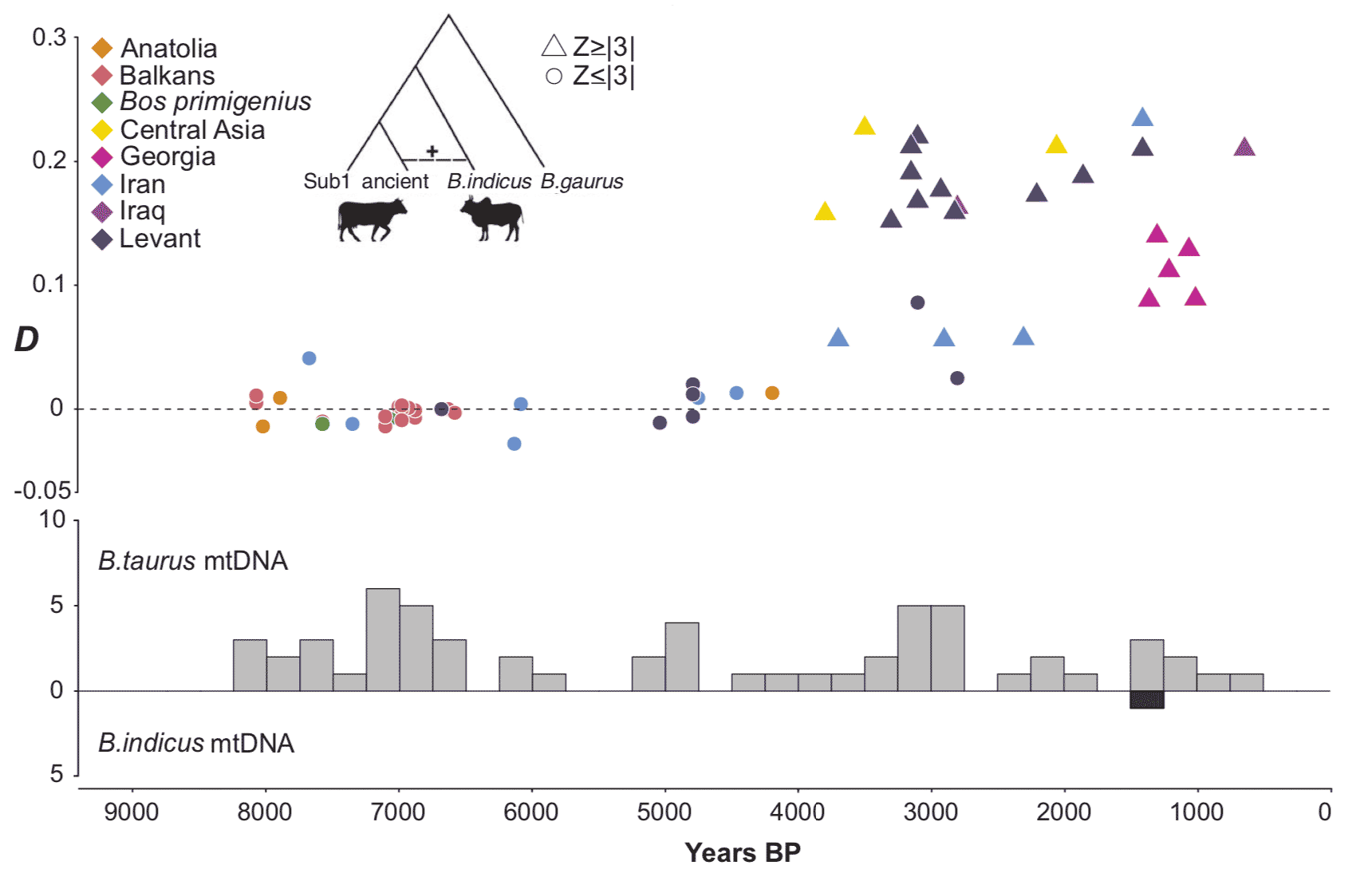 As can be seen from the above figure, after 4000 YBP, there is a sudden spurt in indicine or Zebu admixture across nearly all the ancient samples of Near Eastern Cattle including cattle samples from Central Asia, Iran, the Caucasus, Levant, Mesopotamia & the Balkans.

Again quoting from the paper,

…despite archaeological evidence for contact between civilizations of the Fertile Crescent region and the Indus Valley (9), the influence of the zebu genome is detectable in ancient Southwest Asian cattle only 4000 years later (Fig. 2). However, after ~4000 yr B.P., hybrid animals (median 35% indicine ancestry) are found across the Near East, from Central Asia and Iran to the Caucasus and Mediterranean shores of the southern Levant (table S2 and fig. S1). During this period, depictions and osteological evidence for B. indicus also appear in the region (9, 13). In contrast to autosomal data, but similar to earlier work (14), we find persistence of B. taurus mitochondria, suggesting introgression may have been mediated by bulls (Fig. 2).

What lead to this major turning point ?

Most if not all movements of cattle across large distances in prehistory are usually associated with movement of humans. Did the large influx of Zebu autosomal DNA into the Near East cattle also result due to South Asian population expansion into the Near East post-4000 YBP ?

What we do know from archaeology is that the Harappans were operating across a vast landscape and their presence and influence can be detected in Central Asia, Eastern Iran( Jiroft & Helmand), the SE Arabian coast (Oman & Bahrain) and in Mesopotamia already in the 3rd millenium BC. The Harappans even had their own colonies in these different regions.

It appears that a minority but nevertheless a significant and arguably influential community of Harappans were present in most of these regions away from the Greater Indus region as far as atleast Mesopotamia. Infact, in a lot of these places, the Harappans were apparently living in those places for many generations. It is conceivable that they would have brought and maintained the Zebu cattle in their new homelands.

Therefore, already in the 3rd millenium BC, it is quite probable that the Zebu cattle was already a minor but regular feature of the Middle Asian landscape.

However, after the onset of the 4.2 kya event, with the onset of aridity, it is believed that the Harappan civilization finally collapsed around 3900 kya (1900 BCE). One of the consequences of this collapse is apparently the end of Harappan trade and interaction across Middle Asia.

So the questions is – how did the Zebu admixture in the Near East shoot up all of a sudden in a period when we are led to believe that the Harappan or Indus civilization ceased to interact with this region ?

And it is not just Indian cattle admixture that becomes widespread into the Near East during this post-4000 kya period. As the authors of this paper state,

Westward human migration has been documented around  this time(19,20) along with archaeological evidence for the appearance of other South Asian taxa such as water buffalo and Asian elephants in the Near East(21), suggesting the movement of large animals by people.

Infact, the presence of Asian Elephant in the Near East dates to from the end of 3rd millenium BC to the 8th century BC and is centred around Syria and hence this ancient elephant population is also known as the Syrian Elephant.

The authors of the study cited on Asian Elephants in our cattle aDNA paper above state something very interesting,

…ancient accounts indicate that live elephants roamed and were hunted in the Orontes Valley, the Upper Euphrates Valley and the Middle Euphrates Valley around modern Ana in Iraq, at least between the end of the 16th and 9th centuries BC, possibly into the 8th century BC (Breasted 1906–07; Gardiner 1964: 179, 201; Moorey 1994: 117; Scullard 1974: 28). The core of this region comprises the area of influence of the Mitanni Kingdom, the main local political player in LBA northern Syria…

The Mitanni were an Indo-Iranian, possibly Indo-Aryan elite ruling over the native Hurrian population in present day Syria in the mid 2nd millenium BCE. And we observe that Asian Elephants, most likely imported from the Indus civilization, only appear in the Near East during the 2nd millenium BC and in a geography that was under the political control of the Mitanni. Is this merely a co-incidence ?

A New Interaction Horizon in Middle Asia in the LBA ?

It is quite probable that with the collapse of the old Bronze Age empires all across the Near East and South Asia, this entire Middle Asian region entered into a new era of interaction which is archaeologically not so well-defined. The widespread Zebu admixture in the Near Eastern cattle along with the presence of Asian elephants as also the first attestations of the Indo-Europeans such as the Hittites & the Mitanni and the associated horse-drawn chariots are evidences of this new horizon.

But while the Zebu and the Asian Elephant came from South Asia, one may argue that the Hittites, Mitanni and the horse drawn chariot must surely come from the steppe.

And if this is not all, we have now possibly a very strong evidence of the presence of chariots in South Asia which is as old and probably older than the Sintashta chariots in the steppe.

It maybe noted that before the discovery of the chariots in Sintashta which gave the steppe chariot the distinction of being the oldest known one, it has been argued for long that the invention of chariot is mostly likely in the Near East and not in the steppe due to several factors inimical for the use of chariots on the steppe. You can read more about it here.

The discovery of the Sanauli chariots is likely to revive that debate. Along with this, we also have the prospect of horse aDNA from the Mature Harappan Phase no less.

Genetic evidence of Horses in mature Harappan period. The findings will be published soon.

So could the appearance of the Zebu, the Asian elephant, the Buffalo as well as the Hittites & Mitanni and their horse drawn chariot in the 2nd millenium BC in the Near East have a common cause in their probable migration from South Asia after the Indus civilization collapse.

Certainly some food for thought !

29 thoughts on “Who brought the Zebu in the Near East ?”