Lately, we have been talking a lot of things about South Asia but not much on what is supposed to be the biggest event in the calendar for 2019, India General Elections 2019 scheduled to start 11th April and continue till May. Looking at the Opinion Polls it seems that BJP’s election fortune has become much brighter since the dustup with Pakistan. Although foreign issues do not dominate Indian elections that much. Domestically, general Indian people still seem to regard Modi as a better steward for the Indian economy than Rahul or any other alternatives. I have no opinion on the probable results as I have little knowledge and expertise. Let those who are more informed opine here freely on the elections. Not just probable outcomes but also about social, economic and political directions that this elections may bring about. 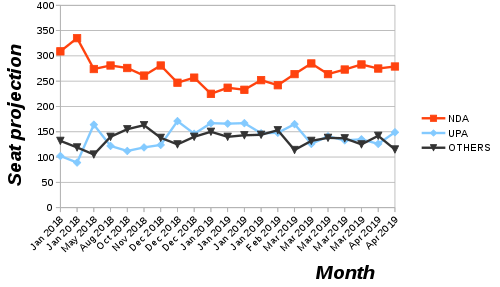 19th March : ” Times Now and VMR survey is back with yet another batch of poll-related data and analysis. In the current survey, the National Democratic Alliance (NDA) is predicted to grab 283 out of 543 Lok Sabha seats, UPA – 135 and Others – 125.

In the last survey, the Times Now-VMR poll had shown that the NDA would have been 21 seats short of the half-way mark had 2019 Lok Sabha Elections been held in January.”