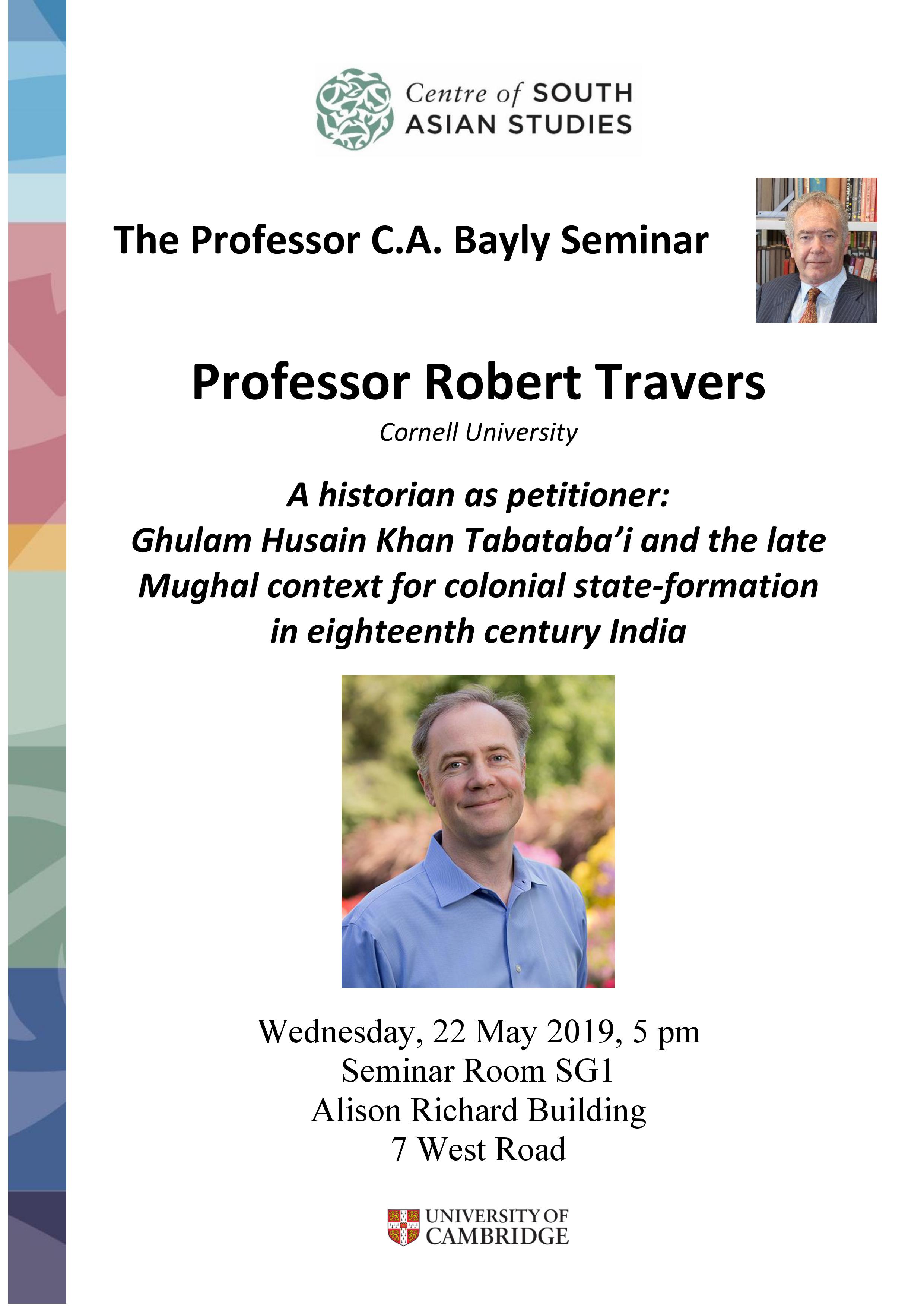 There are no slides but rather a fast lecture so catching what I can.

(1.) Ghulam Husain wrote a massive history (in Persian) in Bihar. He was 30 at the battle of Plassey.

(2.) lots of autobiographic detail in his history.

(3.) his history is part of 18th century Indian historiography.

(4.) Mughal Decline – British rise. Ghulam Hussein was a generic figure; he was only part of a massive efflorescence of Persian histories written in Bihar-Bengal at end of the Mughal period and beginning of the British period by courtiers of Muslim courtiers.

(5.) there was a distinction between aristocratic record keeping (Akhlak – Adaab) and technocratic records by lower levels.

(6.) the equivalent of how the Brits operated in East India is if a foreign power was remaking the British political order (in the 18th century) with low-level excise officials and sidelining the House of Lords.

(7.) The speaker uses a stream of Persian words to denote petition.

(8.) Ghulam Hossein has been perceived as an anti-colonialist but Professor Travers sees him as a petitioner to the EIC to model and replicate Mughal Imperial forms (darbars).

(11.) If the corporate rather than the monarchical feature was alien to Petitioners meant there was no succession crisis in the state. Company Rule became *parasitic* to late Mughal forms of government.

(12.) Though the colonial state introduced novel government practises. The colonial state looked to limit the role of Assemblies (Majlis). It did however work “with the grain” in South Asian political dynamic.

(13.) Ghulam Hossein may have disliked the EIC but signals the shift of Petitioners towards the EIC from the Mughal government. Decentralising forms of Mughal govt vs Centralising forms of Colonial Govt. He talks about sovereignty within a larger authority that is then parcelled out in local rights.

(14.) ZackNote: It’s obvious that Persian was an extremely vigorous language even as far away as Bengal. It would be interesting to study what killed Persian in India. This lecture is one line of Persian words and obvious the EIC committed Cultural Genocide against Persianate Culture in India.

(16.) Shocking I had never heard of this; as I was researching on Raja Shitab, I came across this term “Gentoo“. I have excerpted the line, which is the footnote on page 447 of the previous.

Gentoo, also spelled Gentue or Jentue, was a term used by Europeans for the native inhabitants of India before the word Hindu, with its religious connotation, was used to distinguish a group from Muslims and members of other religious groups in India.[1][2][3][4][5]

(17.) Ghulam Hussein’s family moved from Delhi 1720’s. Hedayat Ali Khan was his ancestor who had been granted a Jagir in Rotas.

(19.) The Mughal state as a place of competing interests (Jagir and Zamindars) create numerous appeals to central state.

(20.) “Sad Ending” when Ghulam Hossein died, his landowning rights were challenged by the Zamindars (?) and his family were eventually disinherited from the Jagir. Apparently the history that Ghulam Hossein wrote to enhance his rights was actually used to disestablish his family based on his father’s death date.

(21.) Ghulam Hossein began to be seen as a late Mughal intellectual. Ghulam Hossein’s Persian became taught as curriculum in colonial colleges as the example of “Persian Tareeq” in late 1800’s in Delhi and Lahore.

(22.) EM Forster’s Passage to India (1920’s novel). Aziz is the character who is a learned Muslim man, a patriot who speaks of Barbur. Aziz is having tea in the govt college in Chandrapore; Aziz suddenly says “see this beautiful room let us admire it. see those curves under the bottom of the arches. it is the architecture of Question and Answer. It was an audience built in the 18th century for some high official.

Aziz is quoting a Persian phrase “Jawab aur Sawal” (Question and Answer). I have found it online here; https://archive.org/stream/ost-english-apassagetoindia/APassageToIndia_djvu.txt

(23.) End with a racially strained Anglo-India tea party. A guft-e-Guh. I think he means the passage above.

In honor of Cam History Professor Chris A Bayly

Q&A extremely interesting but very dense to capture but the gist is that Persianate culture seemed overwhelming dominant in East India. Shocking really how much the EIC nefariousness had to do with its demise..