While the two recent ancient DNA papers have set the Indian media abuzz with talk of whether Aryans were indigenous or whether they came from outside, almost all the English media has ignored the fact the genetic data also shows the migration of ancient Indians or Harappans into neighbouring regions of Eastern Iran and Central Asia.

A couple of articles took note of it but tried to minimise its relevance. Tony Joseph at The Hindu says,

Another spin around the new studies suggests an ‘Out of India’ migration. This is also misleading. If by ‘Out of India’ migration we are referring to the fact that some Harappans visited neighbouring civilisations or cultures such as the Bactria-Margiana Archaeological Complex (BMAC) or Shahr-i-Sokhta, with whom they had trade and cultural links, these are well-known and unsurprising facts.

Girish Shahane at the Scroll.in, opines about the Indus Periphery samples,

The obvious explanation is that the 11 people had travelled to those locations from an Indus Valley Civilisation region. Their presence in such far-flung places testifies to the extensiveness of Indus Valley Civilisation commercial and cultural contacts. It does not suggest a migration out of India extensive enough to change the genetic profile of foreign lands, because if that were the case the 11 individuals would not have been obvious outliers.

Both these writers are hardly excited by the fact that there is indeed evidence of Indian migration into Eastern Iran & Central Asia and they try to explain it away non-nonchalantly as the evidence of Harappans’ trade & cultural contacts.  I mean, why is the overwhelming obsession just about proving the supposed Aryan migration ? Isn’t it exciting that we now have clear and indisputable evidence of ancient Indians already, as early as 3300 BC (the earliest dated Indus Periphery sample), migrating and living in advanced Bronze Age civilizations outside of the traditional geographic boundary of South Asia. What was the nature of these interactions should naturally arouse considerable curiosity.

The writers also grossly underestimate the genetic influence of Harappans on both its neighbouring regions.

What the research paper says

We document 11 outliers—three with radiocarbon dates between 2500 and 2000 BCE from the BMAC site of Gonur and eight with radiocarbon dates or archaeological-context dates between 3300 and 2000 BCE from the eastern Iranian site of Shahr-i-Sokhta—that harbored elevated proportions of AHG-related ancestry (range: ~11 to 50%) and the remainder from a distinctive mixture of Iranian farmer– and WSHG-related ancestry (~50 to 89%).

While this part of the research is reported by our writers they fail to note another equally important piece of research from the same paper which states,

Unlike preceding Copper Age individuals from Turan, people of the BMAC cluster also harbored an additional ~2 to 5% ancestry related (deeply in time) to Andamanese hunter-gatherers (AHG). This evidence of south-to-north gene flow from South Asia is consistent with the archaeological evidence of cultural contacts between the IVC and the BMAC and the existence of an IVC trading colony in northern Afghanistan.

When we take both these statements together we get the clear picture. Not only were migrants from the Harappan civilization present in Eastern Iran and Central Asia, infact the genetic admixture from these Harappan migrants was present in all the native people of these regions and was not just consigned to the Harappan migrants only. It is puzzling as to why this crucial information has completely been ignored by almost everyone.

Quite clearly, the migration and mixing of Harappans with the Central Asians and Eastern Iranians co-incides or slightly pre-dates the transformation of these socieites into large urban civilizations and likely played a crucial role in the transition of these culture into urban Bronze Age civilizations.

How is this not an important finding ?

What the Supplement Says

The primary ancestry source of all these ancient samples from Central Asia & Eastern Iran was the Iranian farmer related ancestry, the same ancestry type which was also the main ancestry of IVC people.

Quoting from the Supplement, they observe from the admixture plot (fig S18, bottom panel, pg 203) that,

“… some individuals from each site also harbor trace amounts of a component that is maximized in Andamanese Hunter-Gatherers (AHGs) and Dravidian speaking groups in southern India. Particularly revealing is our observation of outlier individuals from several of these sites that are exceptions to these patterns. We hypothesize that these individuals were migrants from South Asia (or descendants of recent migrants)…” (pg 202)

Based on the results of the admixture-f3 stats (fig S21-S23) on the BMAC and Shahr-i-Sokhta main group of samples they further observe,

For the BMAC main cluster, we also observe significant (Z<-3) admixture signals with a source from pre-Copper Age Iran and Turan and a source related to present day groups within the Indian subcontinent, a signal that we do not detect in individuals from the earlier period in Turan (Fig S 21 – Fig S 23). This is consistent with the hypothesis that the main BMAC cluster harbors a proportion of ancestry from gene flow from the south, plausibly from South Asia… We observe that the individuals from Shahr-i-Sokhta, also show significant admixture-f3 statistics with one source as AHG. Taken together with the fact that there are individuals with significantly high proportions of AHG-related ancestry at both sites, this suggests that there was gene flow from South Asia out into Turan during the BA (pg 206).

Finally moving onto the qpAdm admixture analysis, our researchers note,

To better understand the population changes associated with these BA settlements we studied proximal sources. We first observe that there are many models that fit under our acceptance criteria, but they are of a similar nature, in the sense that all involve a population from the previously described Copper Age period with additional ancestry related to present-day South Asians. Most working models involve populations from Turan with additional South Asian related mixture, for example present-day individuals from South Asia with minimal Steppe pastoralist-related ancestry, or outlier individuals from Shahr-i-Sokhta and BMAC sites with high proportions of AHG-related ancestry (pg 210).

When we look at analysed aDNA samples Shahr-i-Sokhta, we see that out of a total of 17 samples, as much as 8 of them are classified as migrants from the Harappan civilization by our authors. So essentially about 50 % of the population at Shahr-i-Sokhta was made up of migrants from the IVC. Infact, barring one sample which they classify as an outlier, the other 8 samples, which the authors label as Shahr_I_Sokhta_BA1, also harbour IVC ancestry and the best fitting qpAdm model (p-value – 0.658) suggests that this S_I_S_BA1 group harboured as much as 20 % ancestry from these IVC migrants (table S30, pg 212).

It may also be noted that the IVC migrants at Shahr-i-Sokhta date from a period between 3300-2000 BC while the other group of 8, labelled the main S_I_S_BA1 group only date between 3300-2600 BC. All in all, this cumulative genetic evidence alone is enough to show that Shahr-i-Sokhta was enormously influenced by the Harappans.

This is further underlined when one looks at the archaeological evidence which shows substantial similarities between Shahr-i-Sokhta and sites to its east in the Indian subcontinent. Shahr-i-Sokhta itself only came into existence as a habitation site around 3300 BC but the other major site of the Helmand civilization, Mundigak, found about 425 kms east along the course of the Helmand river in Afghanistan, has a beginning going back to the 5th millenium BC, and it already shows significant cultural parallels with older sites such as Mehrgarh to its southeast. The main cattle type at Shahr-i-Sokhta was also of the Indian Zebu variety further cementing the strong east to west cultural and genetic flow at the site.

To try to brush this off vaguely as evidence of ”commercial and cultural links” and trying to de-emphasize the importance is quite telling.

In contrast, the Italian archaeologist Massimo Vidale, one of the principal researchers at Shahr-i-Sokhta in recent years and one of the contributors of this Narasimhan et al paper, states the following on page 110 of Supplementary section,

The archaeological and genetic evidence thus suggest that a flow of migrants from the northwestern borderlands of South Asia was active at the beginning of the local settlement, and that the same flow, different from the earlier one from northwest, intensified in the following centuries. We unfortunately do not have ancient DNA from Period III and the later centuries of the Shahr-i-Sokhta sequence when cultural influence from the Indus Valley Civilization appears to become stronger.

To be sure, what percentage would a trader community consitute in the population of a foreign city ? And out of these traders, how many are going to end up dying and getting buried in that foreign land ? Perhaps 1 or 2 %. It surely cannot be as high as 50 % besides also contributing your ancestry to all the local people in the foreign land.

But that is what we see at Shahr-i-Sokhta and therefore this is evidence of very deep cultural and perhaps religious and linguistic links.

The body of archaeological literature documenting the links between the IVC, Eastern Iran & BMAC is quite significant and I intend to write on it, God willing, in the next post to complete and complement the picture given by genetic data. 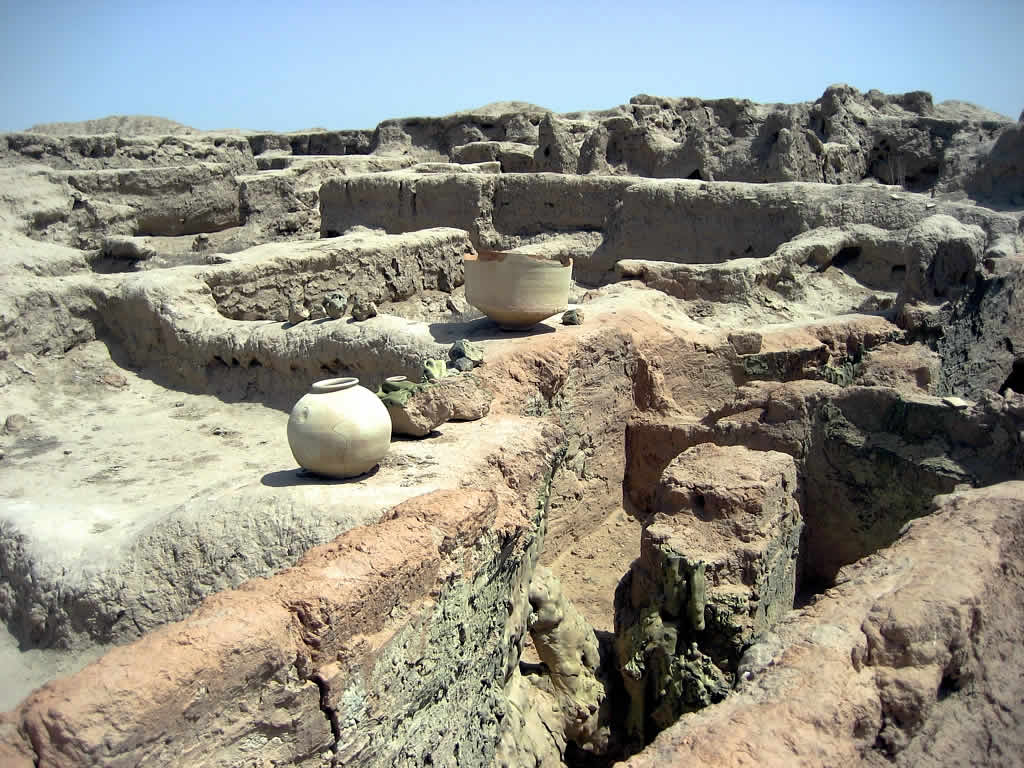 Moving to Bronze Age Central Asia, the authors document 3 samples from the major site of Gonur in the Margiana region of the BMAC which they classify as IVC migrants along with the 8 already noted at Shahr-i-Sokhta. Alongside these 3 samples, there is a slightly later sample dating to around 1500 BC from the site of Bustan, labelled as Bustan_BA_o2, which is not similar to the 3 Gonur IVC migrants but can be modelled as 70 % Swat_IA + 30 % IVC migrants. So this is also for all intents and purposes a likely migrant from South Asia but with a very different genetic profile.

But besides this, as can be read from the quotes from the Supplement and main paper given above, all the ancient samples of the main group of BMAC people also harboured ancestry from South Asia which was absent in the earlier period.

Our authors argue that the 2 samples from Aygyrzhal in Kyrgyzstan in the eastern part of Central Asia, do not have any South Asian ancestry but this is belied by the fact that in all proximal models (table S31, pg 212), these 2 samples show about 17 % admixture from IVC migrants.

Nor is the IVC genetic influence this far to the east in Central Asia an anamoly. A study of mtDNA  from some ancient Tarim Basin samples (4000 YBP), showed the presence of the indisputably Indian lineage M5, besides other lineages such as U7, U2e & R* which are also widely present in South Asia, Central Asia and Iran.

How is this major Bronze Age genetic phenomenon not a significant event of Out of India migration ? Whether this was related to Indo-European migration, only time will tell.

It is a matter of archaeological record that the greatest influence on BMAC was from IVC and the Eastern Iranian civilizations of Halil Rud (Jiroft) and Helmand which were themselves heavily influenced by IVC. Infact, when there is evidence of such overwhelming cultural and genetic links between these regions, political links between these regions would have been a definite reality. Infact, as Mesopotamian records of the 2nd quarter of the 3rd millenium BC, the Eastern Iranian state of Marhasi (perhaps Halil Rud) was closely in political alliance with Meluhha (the IVC).

It is quite instructive that the historically known core region of Indo-Iranians was already greatly in confluence from the Early Bronze Age period.