On December 2nd 2015 Syed Farooq Malik, a young
American of Pakistani origin (born in Illinois) was attending his workplace holiday party in San
Bernadino. He left the party early (it is not clear if there was an argument of
some sort before he left) and then returned with his wife, Pakistani-American
Tashfeen Malik, and the couple opened fire on his coworkers and left after 4
minutes.  14 people were killed, 21
injured. It has since emerged that the couple had 2 assault rifles, thousands
of rounds of ammo and several pipe bombs. They had also rented a Ford
Expedition SUV a few days before the attack and used it for the attack as well
as in the subsequent chase and confrontation with the police. Though they managed
to escape the scene of the crime, they were eventually shot dead after an
exchange of fire with the police. They had left their 6 month old baby girl with
her grandmother on the morning of the attack. Sometime after the shooting,
Tashfeen Malik also reportedly posted a “pledge of allegiance to ISIS” on her
facebook page.

It has since emerged that Farooq Malik had a “normally religious” upbringing but
had become “more religious” in the last two years. According
to his (estranged) dad, he was obsessed with Israel and “shared the
ideology of ISIS leader Abu Bakr al-Baghdadi”.  And it seems that his wife was brought up in
far more Islamist fashion than he was.  Her father is a Pakistani who works in Saudi
Arabia and supposedly became “more religious” there. She lived in both Pakistan
and Saudi Arabia and was a full-time niqabi when she attended Bahauddin
Zakariya University’s pharmacy department.
After marriage, she did not show her face even to her father-in-law and
her brother-in-law and stayed in seclusion in her California apartment. She did
not attend the baby shower thrown by her husband’s coworkers  (the same people the couple later went to
shoot) and it is very likely that she
was more “radical” than her husband.  It seems likely that the two of them decided
to kill people because they wanted to strike a blow for their version of Islam,
but the actual choice of target (i.e. where a group of people  would be murdered) may still have involved
some “workplace grievance” (though no convincing grievance has yet been revealed).

Reaction to the shooting has included some predictable
themes: Left-liberal Americans have tended to focus on the gun control aspect
and some (but not all) of them have downplayed the religious element (or at
least made the reasonable point that whatever the motivation for this
particular shooting, the high death toll was facilitated by the easy
availability of assault weapons in the United States). They are also pointing
out that Muslims commit a vanishingly tiny percentage of mass shootings in the US
and victims of “gun-violence” far outnumber the number of people killed in
terrorist incidents., etc. etc.

Right wingers meanwhile have focused completely on the Jihadi
terrorism aspect and deny that gun laws or the cowboy “pro-gun” culture of the
United States had ANY connection with the event.  The usual suspects think Obama is “coming for
our guns” and is failing to take action against Muslim hordes bent on migrating
to America to blow it up.
“Moderate Muslims” either downplay (or deny) the Jihadist aspect, or
focus on the fact that the Jihadi-bride was “radicalized” in Saudi Arabia, the
supposed sole font of all Jihadism in contemporary Islam. Many Pakistanis back
home, mistrusting all “official accounts” and Western sources on principle, are
not even sure this happened as described and are happy to entertain conspiracy
theories that say this is probably yet another false-flag attack to “defame Islam”.  Even senior anchors educated in the West are
ascribing this to “endemic American workplace violence” and “American
gun-culture”. And the Pakistani government has even tried to suppress media investigation of the Pakistani background of Tashfeen Malik. None of this is surprising, but a lot of it is wrong or only
half-true even on elementary inspection, so I thought I would try to put out
some of these facts and alternative viewpoints.  I look forward to constructive criticism:

A.     The Result of “American Gun-culture” or “Spontaneous Jihad”?

The short answer is “both”. I have no doubt
that Jihad was a major (in fact, primary) motive in this case, but easy
availability of guns surely helped. It is likely that a “self-starting”  jihadist in a less “gun-friendly” society may
have had some difficulty obtaining 2 assault rifles and thousands of rounds of
ammunition.  I emphasize “self-starting”
because (as the Paris terrorist attack makes clear), organized terrorist groups
(and organized criminals in general) can obtain very impressive arsenals even
in Europe, where gun-control is much stricter than it is in America. Mass
shootings in America are mostly “Black on Black gang violence” (and so occur
below the radar of Americans who live outside the specific neighborhoods where
such crime is commonplace. Most liberals only notice them only when they tote up the figures for “355 mass shootings in America this year”), but those that do make headlines tend to the ones
where more peaceful parts of the country are targeted by some shooter. Most of these are carried out by loners (some
motivated by right-wing militia type propaganda, most just motivated by
personal slights and paranoia, etc.) and it is possible that similar loners in
other countries may have some difficulty doing the same amount of damage
(Brevik in Norway being the obvious HUGE exception).  A few have been carried out
by Muslims undergoing “spontaneous Jihad syndrome” (e.g. Fort Hood, Chattanooga) and it is possible that more gun-control may damp down the number of
casualties caused by such attackers. Certainly the London
subway stabber  could have killed
more people if he had a gun, but then again, he may just have been a very
incompetent person. Muslims in China have managed to kill up to 170 people
using nothing more sophisticated than cleavers and knives.  So a more detailed look does suggest that more gun-control may have made the shootings less deadly, but not
necessarily. In the short term, gun-control has very little to offer. 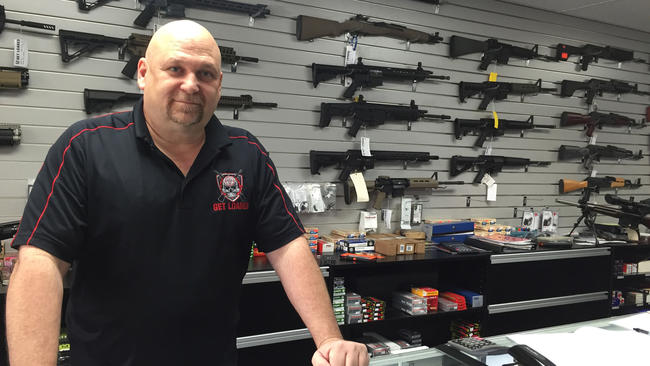 But in the long term it may still be
significant. Not because it will make guns disappear (it is almost impossible to
imagine that in a country with 300 million guns and porous borders), but because its
enaction would itself indicate a significant shift in America’s gun-happy culture. Countries like Canada are not gun-free, but they do
have a culture that does not glorify loners with guns and personal violence in
the way American culture frequently does. But this seems more significant if one has not yet corrected our second misconception. See next.

B.      America’s rising epidemic of gun-violence.

This one is obviously NOT true. Violent crime in the US
has been dropping steadily for decades and is very far below its 1970s peak (a
time no doubt remembered as the “good old days” by many people J). There are specific
areas (mostly inner cities) where violence is indeed horrifyingly endemic and
affects practically all citizens on a daily basis, but outside of those areas,
America is a relatively safe country (though this safety is associated with excessive police violence and truly horrendous incarceration policies). Even when taken as a whole (thus including
the inner cities in the figures) the US is not as safe as Denmark or Japan (poster-boy for monoculturalism by the way), but
it is not as violent as Mexico or Jamaica or even Russia and Lithuania! Especially of note, the crime
rate in “safe neighborhoods” (a large proportion of American neighborhoods) is in the much idealized European,
Canadian or Western European range.  Media hype is a different matter.

Coming to Sunni Muslims, we have a very large number are “moderate
Muslims”, which is shorthand for Muslims who were not brought up in
shariah-compliant households and who do not practice that kind of Islam. Their numbers vary from country to country, but one
can say with a lot of confidence that they are not spontaneous jihad material
either. They can covert, but it is a slow process, it is observable and even preventable (if they are kept away from hardline preachers). Then there are the shariah-compliant Muslims who believe that the Shariah’s
orders for Jihad are meant for very specific situations where a Sunni state has
declared Jihad and those situations (fortunately) do not exist. So they get on
with life in all parts of the world. Many of them are model citizens because they
avoid intoxicants, deal honestly and follow the law. A very tiny fraction of
them may “radicalize” but most will not. The same applies to converts. So yes,
about these (small) groups one may say “they can radicalize” , but very rarely. And even then, there are warning
signs and it is never an overnight process. Finally, there are the true-believer
Jihadists. They have obvious links with Jihadist schools, groups and teachers. They are
small in number and they are not hard for the community to identify, if is so chooses. And they are indeed high risk. Liberals see none of them,
right-wingers see too many. Both are wrong.
I guess what I am saying is that notions of Muslim hordes just waiting for a chance to attack are far outside the bounds of reality. Common sense can actually be a guide here. There is
no need to throw the baby out with the bathwater and equally there is no need
to be willfully blind to warning signs. Biased agenda pushers on BOTH
sides of this debate have obscured common sense options. And while Liberals may
underestimate or misrepresent the threat from radical Muslims, conservatives frequently generalize the threat to all Muslims.

Last but not the least, all
nutcases cannot be stopped beforehand. Some surprises will always happen in a large and complex society . There
is no risk-free society, with or without Muslims. But this is not World-War
Three. Not in the United States. In parts of Europe the proportion of jihadists is likely higher (for various reasons, including racism and multiculturalist liberalism). Meanwhile, in the core of the Muslim world itself, all bets are off. There is no
well-articulated theology of liberal Sunnism. Other organizing ideologies (like
Marxism and pan-Arab nationalism) have manifestly failed. The authoritarian regimes that exist are (for now) the only game in town. These authoritarian elites, who disproportionately
benefit from the modern world,  impose their will using a combination of force, persuasion and foreign support.
But they lack a deep legitimating ideology. This crisis of ideology is extremely
serious, and it may devour some of those countries (though the survival of Jordan is a good example of the fact that even the most arbitrary modern states have more strength than we sometimes imagine). Those Muslim states that are further away from the Arab heartland (and the Israeli-Palestinian conflict) may do better. They can frequently rely on other identities to maintain the legitimacy of their states and new Islams can arise in them with time. But even they will not be compltely free of Jihadist conflict. No state is completely free of conflict of course, and many conflicts unrelated to Islam or Jihad could easily kill millions and destroy whole countries. But predominantly Islamic countries do have the added burden of the conflict of Classical Islamic ideals with modern civilization (not justWestern civilization), and it will take time to resolve this conflict.
Hold on tight.

btw, I think Obama made a good speech.