I continue to see almost universal condemnation or hilarity or schadenfreude about Brexit in my social media circle. Literally NO ONE is in favor it (except those who hate Britain and like Brexit in the sense of “this shit couldnt have happened to a more deserving lot”. I don’t know much about the actual mechanics and consequences and my current view is more or less “if all these intelligent people think it is a disaster, it is probably not going to be a good thing”, but I do feel that 50% plus of the British electorate (and a much higher percentage of the working class and the older citizens) voted for this thing, maybe we should also try to figure out why they voted the way they did? The easy answer is racism, but then, I am sure ALL these people are not just motivated by racism (how does that even work?) and I am sure there are lots of racists who voted for “remain” too (all the bankers can’t be suddenly free of racism 🙂 ). So here, in no particular order, are some comments I had on Facebook and I hope someone will let me know why I am wrong or where I may be right…Random thoughts on Brexit:

Xenophobia is part of this…but is it entirely foolish?
The Western super-elite (and their super-elite friends from other countries, including us, of course) are (at least materially) winners in this globalization until now and may feel great about it. But there are some other aspects to this love of complete and borderless globalization.

1. Obviously the Western proletariat are not happy and to think that they are just stupid people so their fears should not count, may be morally cloudy. It is likely (and perhaps even desirable) that neo-liberal globalization should continue, but those being expected to be swept aside may react..that too should be expected. Also, it is not just the proletariat. There is a substantial number of people who are attached to their own culture and cultural mores who are not comfortable with the new cultural rules of the postmodern Western elite (whether this is good or bad is a separate discussion). They do not want to become (and maybe cannot become) arugula eating, world-culture sampling, atomized, metrosexual individuals with fancy carbon footprints and anti-carbon-footprint posters on the wall. Their wishes may seem archaic and stupid to some of us, but they do exist. What is to be done about them? Have they been sold a bill of goods and are they feeling rebellious?

2.History has not ended. Organized groups (nations, religions, ideologies) control territory, try to expand their control and monopolize resources .. . It is possible that the nature of these boundaries and their defense will change as a connected world divides not on national or religious lines but between the new transnational super-elite and the underclass of all nations, but even that has not happened yet, not completely… Until then, the idea that we can just erase the border and let everyone go where they please seems unworkable and utopian. . The current system is based on certain cultures and their boundaries (which are always fluid, but DO exist) and how and by whom they are erased and replaced is important to many people. No?.

3.Some friends who live in Western countries (even in Britain) seem to be saying “you colonized us, now its your turn and you are complaining. Well, lump it”. But think about it…isnt this the xenophobes argument? that “these outsiders” hate us and our culture, and are only here to destroy us? We may feel we have a “right” to do that, but is it then very surprising if some of the older inhabitants don’t want to be destroyed? (this is NOT a majority view among my friends, but it does pop up. I am just saying, it is an interesting attitude when you think about it 🙂

I certainly do not have a clear position on this… I am still trying to learn. I could be converted 🙂 But I admit that I now tend to be skeptical of some of the elite-postmarxist eurocentric left-wing positions that are popular in my social circle. I am not convinced by the Right wing positions either, but they are so vanishingly rare in my group that I rarely have to bother arguing against them.

Finally, an exchange between me and a commentator (Mr Prasad) on 3quarksdaily.com sort of touches on these issues:

From Mr Prasad, talking about the above video:

This is grimly amusing to watch. Yeah, that convergence with Eastern Europe really is coming whether you vote remain or leave, because EE’s catchup growth is intrinsically easier than Britain’s. (Well, I suppose you can unwittingly try to speed it up, as today. Prediction: not much will change in that direction either.) They won’t merely be markets, they’ll also make products and do telemedicine and whatnot. You can’t expect Brits to perpetually make more than Poles for no earthly reason, simply because they are Brits. This globalization genie isn’t going to be squeezed back into the bottle, and the Chinese aren’t going back to starving in farms. Oh, meanwhile it’s more than just econ, those lorry drivers really are going to have job trouble when automatic cars become safer than regular ones.


The Trumpist / Sandersist solution is basically a collective stamping of feet angrily, denying trends instead of adapting to them. They rage (and how fashionably in the one case) about the evils of neoliberalism and the actually awful 1% and “the Establishment,” but fact is they have nothing half as good to offer as policy that’s growth-promoting and encourages measured global integration, together with redistributive taxation, retraining and moving up the value chain where at least you have comparative advantages.


What they offer is mood affiliation and folksy “real talk” masquerading as plain dealing. Real plain dealing would be “stop living in the past” and even (a variant on) that old chestnut “the rest of the world does not owe you a living.”


Next they can build a wall, or mine the English channel or something. Perhaps Farage can be deputized to whip the Hellespont, heck all of the Mediterranean why not.

My reply:
By the way, on The topic of “You can’t expect Brits to perpetually make more than Poles for no earthly reason, simply because they are Brits..” is a can of worms (as you well know). Leaving aside the issue of whether the Brits are (marginally) biologically smarter than the Poles (possible, but not very likely?), there is the issue of culture. If we assume that Danes and Gorkhas are equally intrinsically smart i.e. there is no biological constraint, then the remarkable difference in living standards and intellectual achievement (another can of worms, but lets go with it for now) has to be down to culture. If there is really something about British culture (nothing eternal, just what it has evolved to be at this particular stage in history) that makes it more successful (defined, for moment, in the way all my leftist friends would like to define it), then it is possible that this edge will persist for a few decades (which is about as far as we are really concerned with here). And the Brexiters would say that is exactly why they brexited, to keep it that way. Though it may be that Nirad babu was right..and whatever edge the English had is already gone. Which may mean that this particular vote was a tragic error.
No?

Mr Prasad:
Oh I certainly don’t mean to predict equal wages or productivity or innovation around the globe. Institutions, culture, and a head start all matter enormously, and I don’t buy the idea that all cultures and value systems are equivalently good or productive of progress and excellence. You knock on an open door with all that. [And the brexiters are right to notice that the replacement of melting pot strategies with multiculti isn’t working]. And why leave aside biology tout court, that’s just more theology. Especially going forward when there’s every reason to expect the Chinese will use CRISPR v10.0 to make their citizens more smart and healthy and what have you, and have a head start doing it.


What I think is simply:
a) that there will be a move in the direction of leveling, not that the outcome will be an absence of cross national disparity, and
b) that the expectation in the normative sense, absent earthly reasons, that British *should* make more will seem less plausible with every additional corporation whose shareholders don’t care where the workers or customers are. Frankly they are more internationalist than the good comrades ever were. (Unlike the comrades they don’t feel more sympathy with Brits than Poles from across the Atlantic. Bully for them.)


And further that this trend cannot be stopped (at least without something drastic like large scale war – you can always hurt others by being willing to hurt yourself.) Western liberal states can mitigate downward pressures for working classes, try to move up the value chain, and should put in place something like a UBI (not that this is a panacea either, but it’s better than not having it).


Actual plain talk sounds like Lee Kuan Yew, not Jeremy Corbyn. But the chattering classes have revolution in their hearts. Bougies tend to find such dreams exciting, at least till their world starts to bern.


The exchange continues at 3qd: http://www.3quarksdaily.com/3quarksdaily/2016/06/mark-blyth-on-the-brexit-vote.html

Meanwhile, some people want a redo. In Islamic law, if you divorce your wife, then realize you were drunk and stupid, you can have her back, but she has to have sex with someone else first (she has to marry them too, but she really has to have sex). The Germans may demand some such humiliation if the Brits want a redo 🙂 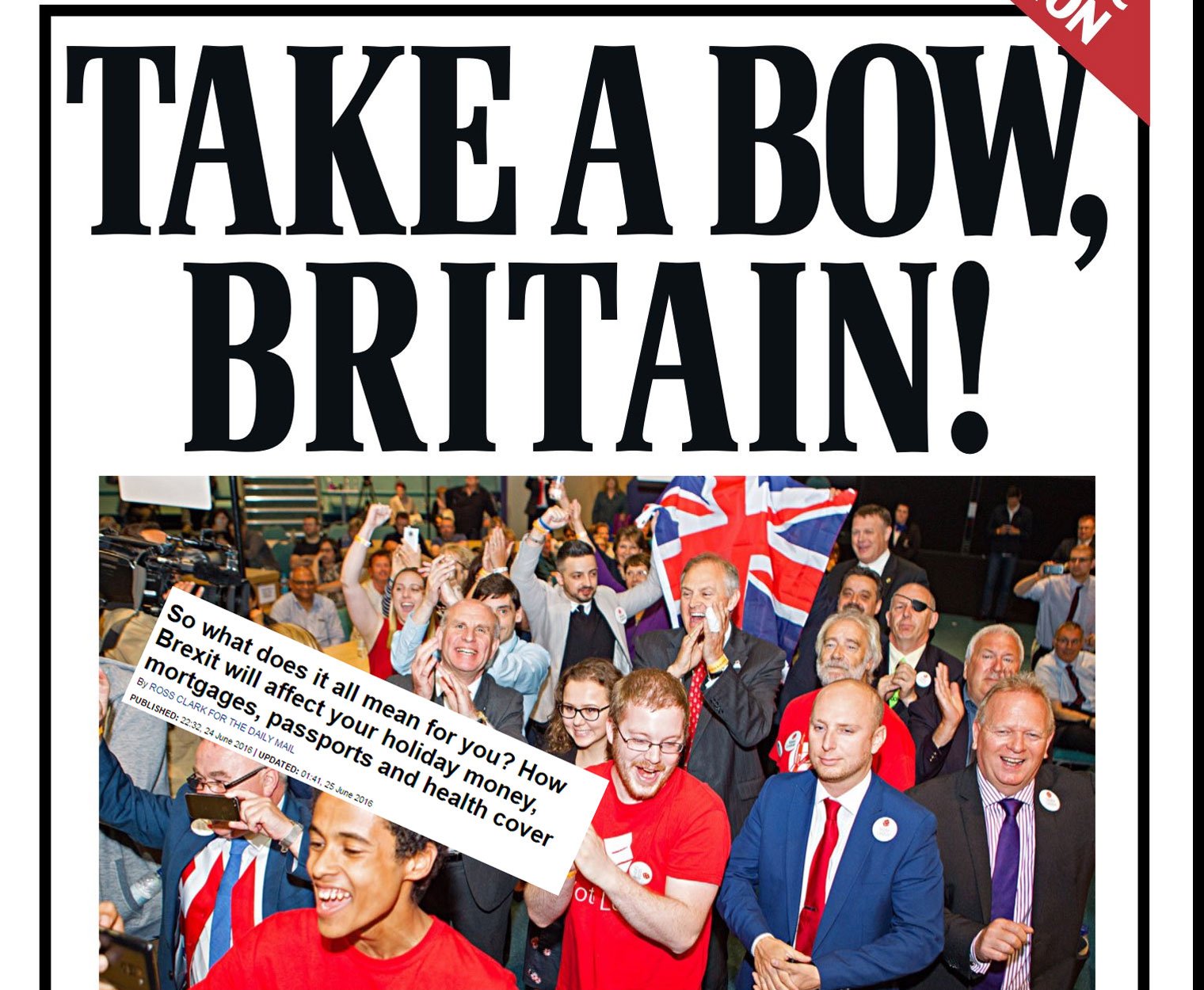