Nothing like it in Punjab where they are in single digits across the state. This is notwithstanding the fact that back in 1947, Muslims were upwards of 40% in the districts of Amritsar, Ferozepur, Gurdaspur and Jallandhar – all of which are in Indian Punjab today.

Punjab started with a clean slate. On either side of the border. Whereas Bengal remained complex demographically, with significant Hindu population in East Pakistan and significant Muslim population in West Bengal.

But the trends of the minority population on either side of the border in Bengal, have been radically different since 1947.  In Bangladesh / East Pakistan, Hindu population has reduced significantly since the 1950s. A decline from 22% in 1951 to 11% in 2015

In sharp contrast in Indian Bengal, the minority population has thrived, with a significant increase since 1951. Here are the numbers –

But it’s also interesting to see the demographic evolution of the provinces before Partition. We tend to think that the demographic mix changed decisively in 1947 (more so in Punjab than Bengal). But that doesn’t mean there weren’t major changes in late 19th / early 20th century.

Let’s take a look at the religious composition for Punjab as a whole (both Indian and Pakistan portions) before 1940s. We see a declining Hindu population in Punjab as we move from the 1880s to 1940s. This decline clearly predates the partition and even the idea of Pakistan 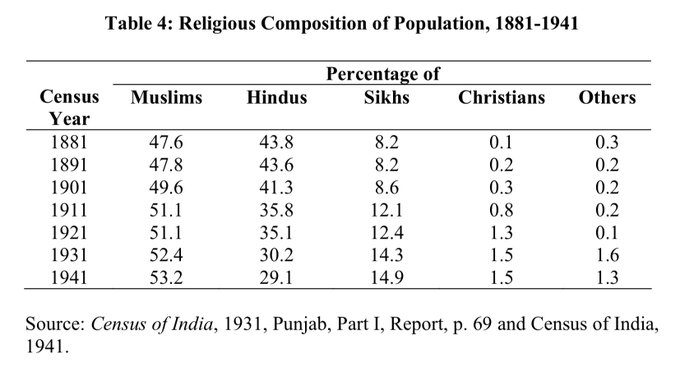 Notice the sharp decline in Hindu population from 43% in 1881 to 29% in 1941. But this drop is not accompanied by a rise in Muslim numbers. Rather we see a near-doubling in the Sikh % between 1881 and 1941. One is not sure if this was indeed driven by conversions, or whether Sikhs became more conscious of their distinct identity and separateness from Hindus in those six decades, leading to a surge in Sikh census figures.

When we look at East Bengal pre-independence, we see a similar story. The demographic change long predated the partition, though it was less drastic than in Punjab. Please note these numbers are for East Bengal and not united Bengal.

I found these numbers fascinating, The purpose is not to emote people, but to understand the long run trends and the underlying demographic reality of these provinces.

We tend to think of partition as a “discrete” event. But demographic change long predates Partition, and it continues long after the Partition particularly in Bengal (both West and East). Less so in Punjab, as Punjab was rendered homogeneous on either side by Partition violence.