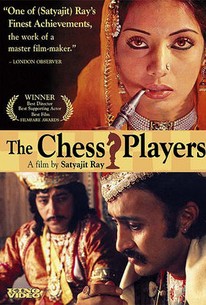 I just happened to catch Shatranj Ke KhilaRi on youtube (you can see the whole movie on youtube, though I am not sure if there is a free subtitled version.. for that you may have to pay). I saw this movie in the 1980s and I remember watching it as:

Now I saw it after 35 years and it seems to me that these are exactly the worst things about the movie. It is in fact a VERY funny, beautifully directed, brilliantly acted period piece that anyone can enjoy without thinking “art movie”.  But it is NOT a good depiction of how and why the British conquered India. The annexation of Oudh was just that, the annexation of Oudh. Wajid Ali Shah was a very unique personality, a gentleman and a patron of the arts, but hardly a real ruler. His deposition did not require any great chess move. The Oudh nobility had decayed long before this event and the conversion of Oudh from indirect rule (with British officers manning the Oudh army and supervising tax collection, etc) to direct EIC rule was typical of many similarly decayed nawab-doms, but NOT typical of the British conquest of India. It may be that the decaying hulk of the Mughal empire was just as depicted in that movie, but the Mughals did not rule most of India by that time. The stylized story of perfidious albion conquering the decaying Mughals was true enough of Bengal, Bihar and Oudh, but India is much more than that…The conquest of most of it was a much more serious affair, fought against harder men than Wajid Ali Shah (Haider Ali, Tipu Sultan, the Marathas, the Sikh Empire, etc). It was an unequal contest in the sense that Europeans in general were far more advanced in science, state organization and military arts, but some of the rulers who held real power in their domains (Marathas, Sikhs, Mysore, Nizam of Haiderabad, even Nepal) did make efforts to modernize their military and many of them did put up a fight. They did not lose because they were composing music, organizing kathak dance or playing chess, they lost because they were disunited, and the British proved better than them at most things that matter in statecraft. To take this movie as a metaphor for that struggle or as a good depiction of it is a disservice to history. This may be a good enough description of the annexation of Oudh, but every reviewer on Rotten Tomatoes seems to take it as a great depiction of the British conquest of India, which seems wrong to me.

That said, it is still a good movie. Ignore the politics, enjoy the acting, the comedy, the dialog. Sanjeev Kumar and Saeed Jaffery are both great as the aristocats playing chess while their wives have affairs or get sexually frustrated, Victor Bannerjee as the prime minister, Shabana Azmi as the wife, all do a great job, though the best performance is by Amjad Khan as Wajid Ali Shah.  Tom Alter (the late American-Indian actor.. I assume that would be the term; if an Indian born in America is Indian-American, then an American born in India would be American-Indian?) is also good as the Urdu speaking English officer advising General Outram.

My favorite dialog: Wajid Ali Shah asking his prime minister why he is crying? Did Outram recite some poetry or sing a song to him? because only music and poetry can bring a real man to tears!

Postscript: A few links to reviews from the time

Washington Post (enriched by the comprehension of an exceptional film artist, who perceives clearly what this historical parable signifies for his country and his compatriots.)