Imagine for a moment that you have two ladies in your life (god forbid) and one was a  non-vegetarian and the other vegetarian, how will things work out? As Soumik Sen explains things will be fine if the ladies are being kind (as they normally are) but from time to time when the dam of anger and frustration breaks and the inner goddess (Durga) marches out to slay the monsters….beware of the gulaab gang.

That said Mirch Masala (and Smita Patil,Naseeruddin Shah, Deepti Naval and Om Puri) is an all time classic and cant be
beat. 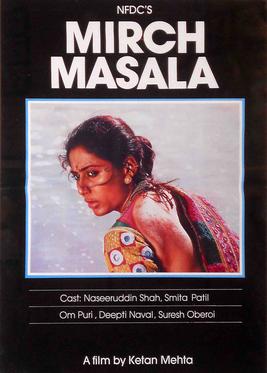 How did you become a filmmaker? I was born
and brought up in Kolkata. After studying at St Xavier’s, I did my masters
in Economics from Delhi School of Economics. I did a brief stint at the World
Bank, after which I became a business journalist and produced a business show
on television, where I was required to research, write and interview people for
the programme. I disliked Delhi as a city and after five years of being a
journalist, I took a transfer to Mumbai, as I wanted to write films. I met Raj
Kaushal, who was a friend’s friend and told him that I wanted to write films.
He gave me my first film to write Anthony Kaun Hai, which Raj himself directed.
I then wrote the Kishore Kumar biopic and spoke to Ranbir Kapoor. This is
before Barfi. And then Anurag came on board to direct it. In the meantime, I
wrote Gulaab Gang and have directed it. My next film will be a biopic based on
the life of PC Sorcar, which I have written and will be directing too.
How
did Gulaab Gang happen? I actually wanted to do a ‘Western’ which is a big
film experience on the big screen. Anurag Basu and Sanjay Leela Bhansali give
their audiences that. Sholay would be the best Indian example of a Western.
Every Western has a protagonist and antagonist. And the underdog will take down
the really powerful guy. Also, Mirch Masala was a massive influence. I
believe that men are not big enough to empower women. And actually, if women are
financially independent, men become redundant in their lives. So we wanted to
create a masala film, where men are almost irrelevant. I have always been a
massive Madhuri fan. I presented the film to her completely avoiding eye
contact with her. I had written this film keeping only Madhuri in mind and she
said yes. If Madhuri had not said yes, this film would not have happened.

How different are Madhuri and Juhi to work with? Madhuri is somebody I can watch the Gunda video with. Gunda is a cult
classic starring Mithun Chakraborty and it is so bad that it is so good. It is
a D-grade film, but Madhuri gets it and loves it. I introduced her to it while
shooting. Juhi is far more prim and proper. She
is fun, but in a formal way. Madhuri is much more spontaneous than Juhi. Juhi
is a lot more studied, conscious and puts in a lot more thought.   Madhuri
is incredibly professional. She will be there for a 5 am shot at 4.45 am with
her makeup on. We had no stunt doubles or body doubles for any of the shots. Madhuri
is non-vegetarian, Juhi is vegetarian. I remember when my associate
director came to meet me for the interview, I asked him only one question, ‘Are
you vegetarian?’ He said no. I said, ‘You are in.’ But I am way too
grateful to Juhi to allow me to break her mould.

Who are you most attached to? My mother. She is a very strangely crazy
person and I am a lot like her. She is extremely loving and gets into these
fits of this tempestuous anger, has a giving heart and likes to keep everybody
happy. She also has a very discerning eye for music, art and cinema and she is
a no-nonsense person when it comes to her telling you what she likes or doesn’t
like….She came here and I made her meet Madhuri who immediately touched
her feet. My mom immediately said, ‘See her upbringing.’

Are Bengali women dominating? I like dominating women as they are more
competent.