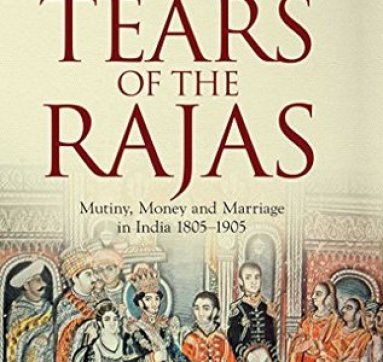 From my personal blog:

Ferdinand Mount’s The Tears of the Rajas: Mutiny, Money and Marriage in India 1805-1905 (Simon & Schuster 2015) tells the story of his grandmother’s family—the Lows of Chatto–who spent a century serving the East India Company. The book focuses on Mount’s  great-great grandfather, John Low, who arrived in India in 1805 and finally retired after the Mutiny of 1857 (the First War of Independence as it is known in India). John’s sons also served the Company, with one of them—General Sir Robert Low—being involved in the 1895 relief of Chitral, the northernmost outpost of British India (now in Pakistan).  The Lows were also related by marriage to other prominent British Indian families, including the Thackerays (which included the novelist William Makepeace Thackeray) and the Metcalfes. John Low’s daughter Charlotte married Theo Metcalfe, the son of Thomas Metcalfe, the British Resident at Delhi.  Through the stories of these families, Mount provides an enlightening perspective on what life was like for the British as they consolidated their Indian Empire during the 19th century.

It is ironic that John Low, who firmly believed in leaving native kingdoms alone whenever possible, was involved in the deposition of several princes from their thrones.    The first of these was the Maratha Peshwa, Baji Rao II.  In 1817-18, Low was the assistant to Sir John Malcolm and was responsible for getting the Peshwa to surrender and go into exile in Bithur, a small town just outside Cawnpore (modern Kanpur).   He also served as Baji Rao’s jailer in Bithur. The Peshwa’s surrender brought an end to the final Anglo-Maratha War.

Later, while serving as the British Resident at Lucknow, Low was responsible for deposing Munna Jan, the boy-king of Oudh (Awadh).  In 1837, after the death of Nawab Nasir-ud-din Haider, the British decided to put his uncle, Muhammad Ali Shah (Nawab Wajid Ali Shah’s grandfather) on the throne.  However, the late Nawab’s stepmother, The Padasha Begum, had other plans and led a coup in favor of Nasir-ud-din’s son, Munna Jan.  Low thwarted this rebellion and sent the Begum and Munna Jan to Chunar Fort, near Benaras, where they were locked up for the rest of their lives.  A sepia drawing by Monsieur Dufay de Casanova, the Court Painter, entitled The Begum’s Attempt to Usurp the Throne of Oudh for Moona Jan, 7th July 1837 “conveys the darkling chaos with the heroic Resident standing firm and his brother-in-law John Shakspear with his huge black mustachios being manhandled by the supporters of the Begum, who is just visible in her palanquin below the throne” ( Mount 295).

In contrast to John Low, who did not believe that the British should annex territory, various Governors-General were interested in increasing the revenue of the Company and expanding the area under direct British rule.  The chief example is Lord Dalhousie, who is responsible for the final annexation of Oudh that sent Nawab Wajid Ali Shah into exile in Calcutta. Mount writes: “Across the path of these vital modern communications there still lay a wodge of native principalities, as much a barrier to the spread of British justice as to the British spirit of modernity. The petty princes of Bundelkhand, the greater rajas of Nagpur and Jhansi and above all the King of Oudh were an offense to His Lordship’s pious and impatient eye. With their eunuchs and their dancing girls, they stood, or rather rolled, in the way of progress” (416).  John Low was against Lord Dalhousie’s intent to annex territory, arguing that deposing native rajas who had not broken their word to the British alienated the people as did “remitting large portions of the revenue for pensions and salaries in England (which bring no return to India), instead of spending such revenues within the countries which produce them” ( 421).  He went further and wrote that “the natives of India are in one respect exactly like the inhabitants of all other parts of the known world, they like their own habits and customs better than those of foreigners” (423). Low recognized that British annexation was the cause of great resentment among the Indian people.

However, for Lord Dalhousie, Oudh was “a cherry which had long been ripening” (430).  In February 1856, Wajid Ali Shah was deposed. Mount writes: “Wajid Ali Shah was the last of the weeping Rajas to discover how much British friendship was worth. Every native prince’s dealings with John Low and his clan seemed to end in tears” (443).