We’ve been watching the excellent Suno Chanda. It’s the story of a respectable Muhajir industrialist family in Karachi but features some ethnic characters as well (a Punjabi mother in law and a Pathan Uncle).

Even though I spent formative years in Islamabad the only ethnic language I was exposed to was Pushto, which was the domain of the labourers, house help and security guards. Punjabi was simply non-existent and Urdu & English were the dominant languages. So I haven’t heard much Punjabi and to be honest growing up all the Punjabi neighbours were the “Pakistanis” while the Sindhis, Pathans were the exotics.

So for the first time I’ve really been listening to the Punjabi language in sustained doses.

Udaari and Dastaan also had Punjabi speakers but in Dastan the Muslim Punjabis spoke chaste Urdu while it was the Sikh kidnappers who lapsed into comical Punjabi.

What is rather shocking to me is how Punjabi sounds like a rustic version of Hindustani. A sort of Braj Brasha for the East?

What makes Sindhi a teachable language but Punjabi a foul one?

Little did the opposing party know that this could be expected of any language spoken in Pakistan but Punjabi, for it is considered by our beau monde to be an illiterate version of Urdu owing to the likeness of the two languages. Speaking Punjabi in public is frowned upon and is not used by our nonpareil A-list to even communicate with servants. The current status of this 14-centuries-old language can be gauged by the simple inclination of Asif Ali Zardari to deliver at least some part of his speeches in Sindhi, but the smirks and guffaws that erupt in assemblages of the Pakistan Tehreek-e-Insaf when Imran Khan utters a single phrase in Punjabi.

Something has happened in the history of Punjabi whereby Hindustani speakers pushed Westward into the Lahore region (Amritsar is essentially a Lahori suburb). As an aside in the “Sacred Geography” of India; are there any Hindu holy sites in present-day Pakistan? 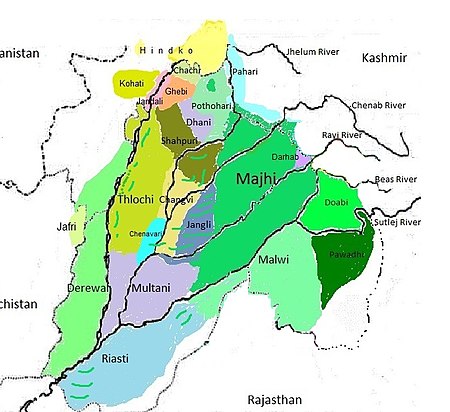 What is interesting is that all the “Lahnda” (Western) dialects of of Punjabi are in Pakistan and all the Eastern dialect (except for the prestigious and no doubt Hindustani influence Majhi) are in India.

This division between Lahnda and Eastern Punjabi was noted long before Partition; in fact the 1922 Britannica Encyclopedia notes:

The eastern and western plains, which are divided from each other by a line passing through Lahore, are dissimilar in character. The eastern are arable plains of moderate rainfall and almost without rivers, except along their northern and eastern edges. They are inhabited by the Hindu races of India, and contain the great cities of Delhi, Amritsar and Lahore. They formed, until the recent spread of irrigation, the most fertile, wealthy and populous portion of the province. The western plains, except where canal irrigation has been introduced, consist of arid pastures with scanty rainfall, traversed by the five great rivers, of which the broad valleys alone are cultivable. They are inhabited largely by Mahommedan tribes, and it is in this tract that irrigation has worked such great changes. The Chenab and Jhelum Canal colonies are already pronounced successes, and it is hoped that in process of time the Lower Bari Doab and the Sind-Sagar Doab will be similarly fertilized.

The British Raj and their schemes were disastrous for the aristocratic & urbane Mughal-Muslim population of Greater Delhi (the heart and soul of modern-day Pakistan) but very beneficial for the Punjabi Muslim peasants & cultivators (the majority of Pakistan).

Much in the same way the Mughals focused their attentions on their most prosperous province, the Bengal Subah so did the British do the same with the Punjab where their relatively advanced technologies made much headway. It’s interesting that the Punjab gained at the expense of Bengal under British rule. One could almost say the needless, excessive and tragic partition of Punjab (compared to the relatively light toll on the Sindh, UP or Bengal migrations/partition) was a retribution on Britain’s favorite province..